Here’s what the haiku poem type is:

Haikus are a short, unrhymed form of poetry that originates from ancient Japan.

Although early haiku poem themes typically revolve around nature, it expanded its subject especially in the 19th century when writing haikus was revitalized.

If you want to learn all about the haiku poem form, then you’ve come to the right place. 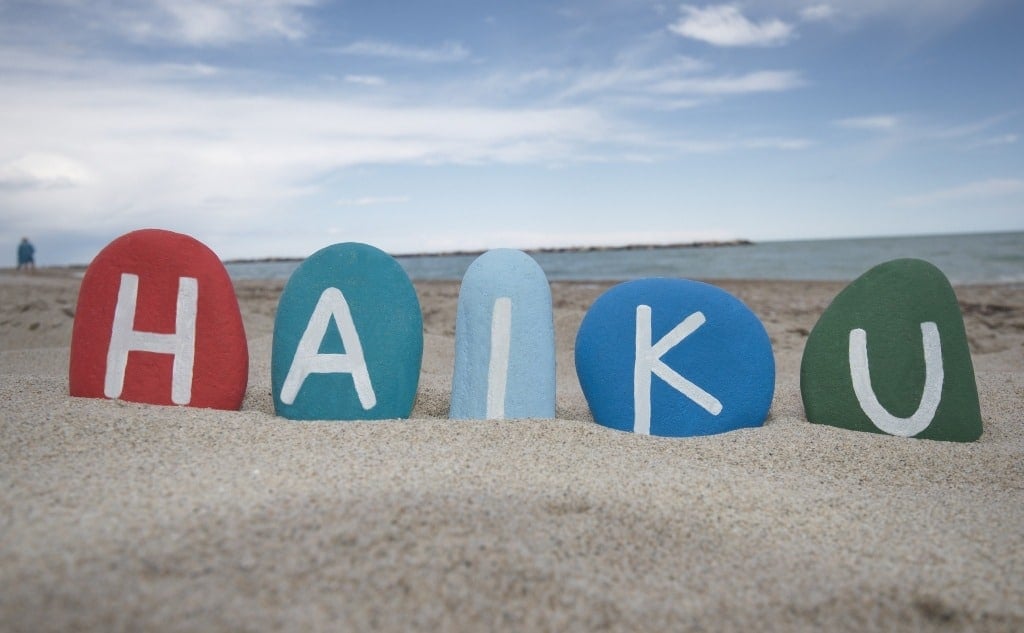 What Is a Haiku?

Most fans of poetry could tell you that the haiku is a type of short poem originally from Japan, but there’s more to unpack than just that.

Haiku is only one form of Japanese poetry, with many relatives and an interesting origin.

Traditional Japanese haikus have significantly more standards to meet than the English form of the haiku that has been popularized in the western world.

Regardless, the English haiku is relatively simple and is a popular starting point for poets.

In English, we simply treat them as poems with three lines and seventeen syllables, in a 5-7-5 pattern.

This makes the English haiku one of the easiest forms to write other than free verse, though its brevity ensures that writing a truly masterful haiku will never be easy.

What Are the Basic Properties of a Haiku?

How Are Haikus Structured?

The English haiku is a simple three-line poem. The first line and last lines have five syllables, and the second line has seven.

Traditional Japanese haikus are substantially more complex. For starters, they are obligated to use a kireji, a “cutting word,” which forcibly separates the haiku into two sections.

English has no true equivalent to this distinction, but this technique has been likened to the use of harsh ending punctuations in some circles.

The purpose of the kireji is to offer structure to the poem.

English haikus often disregard this in favor of treating the entire poem as one fleeting thought.

The other major element of a Japanese haiku is the kigo. This is a word or phrase symbolizing a season.

There is an extensive list of specific words for each season, acting much like a poetic dictionary, utilized in the art form. This is called a saijiki.

Attempts have been made to transfer this step into English, but to mixed success since most English writers do not like to be told how to write.

This emphasis on using a seasonal word lends itself to poems about nature and the seasons, so it should come as no surprise that those remain the most prominent themes in haiku today.

As with all forms, haiku is gradually branching out into other topics, but it holds firmly to its roots in classical Japanese literature.

The unit used in Japanese haiku is also technically different from our interpretation.

While English uses syllables, a predominantly phonetic division, Japanese haikus are measured on a unique linguistic unit that has no counterpart in English.

Naturally, English can’t emulate every quirk of a foreign language with completely different roots, so this distinction is almost completely lost in translation.

What Is an Example of the Haiku Poem Type?

Above is a simple example of an English haiku.

The 5-7-5 phonetic structure is represented, but it should also be noted that it matches two other standards.

First, the use of a dash on the second line is standing in for the “cutting word” that would normally be used in Japanese, dividing up the poem into two thoughts without breaking the sentence.

Additionally, the use of words like “shower” and “flood” passively brings to mind visions of spring, acting as a stand-in for the kigo that would appear in a traditional Japanese haiku.

Your own haikus do not necessarily need to utilize these additional techniques, but it is one way to interpret the form that maintains a closer relationship to its traditions.

What Is the History of Haikus?

Haikus evolved from hokku, beginning pieces of a longer form of poetry called a renga.

The modern name was popularized by Masaoka Shiki in the late 1800s, but writers had already been experimenting with using the hokku as its own piece before that.

The hokku started developing into its own entity as early as the 17th century, thanks largely to the influence of the Bashō school of writers.

Matsuo Bashō, the main proponent of this usage, is still revered to this day for his contributions to poetry and has even been deified as a saint.

It was not until at least the 18th century that this form of poetry started to see some roots in the west.

It’s interesting to note however that it was never truly able to take hold due to its enigmatic structure that simply didn’t translate well into English and other languages.

The spread of haiku into the English-speaking west can largely be attributed to scholars like R.H. Blyth, one of the first to make a concerted attempt to explain the form to a western audience.

Around the mid-20th century, the form finally started to take on another life overseas.

It should be noted, of course, that speakers of English, Spanish, and French were all experimenting with the form in the early 20th century.

Poets are always eager to try something new, but it wasn’t until around the middle of the century that the form started to congeal into a more concrete shape in other languages.

What Are Tips for Writing a Haiku?

Unlike most forms of poetry, a haiku is not something that usually requires extensive thought or preparation, at least in English.

The main thing to remember when writing an English haiku is that seventeen syllables can be very limiting.

An idea that cannot be summed up in one sentence, or two very short ones, simply won’t work well in a haiku.

This tension between the brevity of the form and the desire to include as much meaning as possible is where much of the artistry comes from.

If you would like your haiku to feel as genuine to the tradition of the form as possible, then it may be necessary to read up on the various terms introduced previously.

At the very least, it may be worth trying to include some image that makes you think of a season. This might be the chirping of crickets for summer or the brief rainfall of spring, for example.

English speakers have written their own saijiki, if you’d like to be as authentic as possible, but there’s honestly nothing stopping you from choosing your own representations instead.

Many writers of haiku keep an eye out throughout the day for images that they want to capture in a poem.

A well-written haiku is a sort of like a photograph, sharing a singular moment that felt beautiful.

Whether you’re trying to capture the charm of your daughter’s laughter or the passing whimsy of a sunset beside the overpass, a haiku is always an interesting form to play with.

Haikus taking over as the most popular form of Japanese poetry would have been an exciting achievement on its own.

The fact that they then went on to become an international phenomenon is just overkill.