Here’s how to write a poem that ryhmes:

The mechanics of rhyming poetry are simple, and like a well-oiled machine, it’s easier to pick them apart than you might think.

Simply put, a true rhyme (or perfect rhyme) is when the end sounds of two words match perfectly. If you wrote them out with phonetic symbols, the ends would match.

So if you want to learn all about how to write a rhyming poem, then you’ve come to the right place. 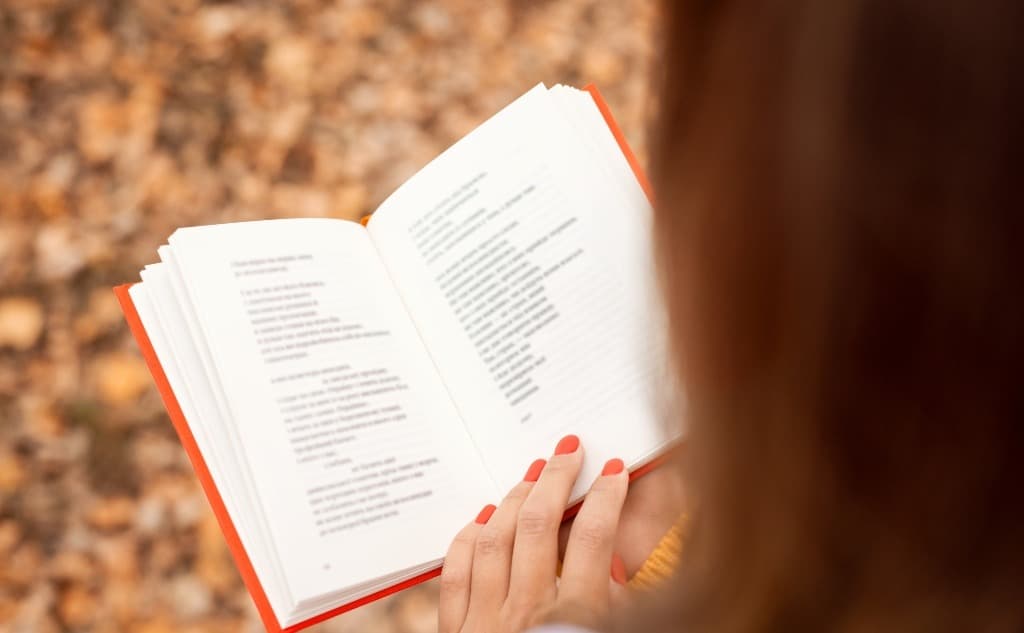 How Do You Write a Rhyming Poem?

Poetry as a medium is often associated with rhyme. When people think poetry, they think rhyme.

While it is entirely possible to write poetry without rhyme, there were periods of history in which a rhyme without any sort of meter or rhythm would’ve seemed treasonous.

More importantly in our modern context, rhymed poems are fun.

Rhyme is a way to add charm and character to the words on the page and can, in some cases, be used to emphasize the most important lines or concepts of the poem.

Having said that, many would-be poets believe that they can’t break into the medium because creating rhyme is just something that’s ‘beyond them’ in a sense.

It’s important to understand that there are simple mechanics behind rhyming poems and, just like a well-oiled machine, it’s easier to pick it down to the parts than you would think.

First, let’s quickly discuss the difference between a true rhyme and a slant rhyme, since it will help us define what exactly a rhyme is in objective terms.

What Are True Rhyme and Slant Rhyme?

In simple terms, a true rhyme (or perfect rhyme) is when the end sounds of two words match up perfectly. If you were to write them out with phonetic symbols, the ends would be a one-for-one match.

Slant rhyme is when two words almost rhyme. This is a little more subjective but typically involves two words that share an ending vowel sound and perhaps a similar but not the same ending consonant. The similarity can create an illusion of rhyme.

Occasionally the ending consonants may be the same with a slightly different vowel instead.

Putting it bluntly: Slant rhymes are often used as a compromise.

English is a complicated language where the words don’t share endings as often as something like Italian or French, so poets may sometimes be put in a situation where the words that rhyme a line perfectly don’t match up with the intended meaning of that rhyme.

This does not mean slant rhymes are inherently bad, but you should be aware that using too many of them in a single poem can lead to some criticism from fans of rhyme.

Of course, this is an art form we’re talking about, so coping with criticism is par for the course.

How Do You Choose a Rhyme Scheme?

Now that we have an idea of what rhyme is, let’s talk rhyme scheme.

You might decide not to have a set rhyme scheme, or you might decide you need one, depending on preference, but you do need to know what they are so that you’re making a conscious decision whether to use one or not.

Many poetic forms, such as sonnets, have predetermined rhyme schemes, but I don’t advise writing formal poems for your first few rhyming poems, as they may have too many other standards to keep track of for a new poet.

Rhyme schemes are written as a series of letters. Take the following sequence: AABB ABBA.

So what if some lines don’t rhyme? Well, then we would signify them with letters that don’t match any other letters. Look at this sequence: ABCDED.

Note that only “D” is repeated. So in this example, only the fourth and sixth lines rhyme:

Now, you don’t necessarily need to have a pre-planned rhyme scheme all written out in letters before you write a poem.

You may find it easier to simply start writing and then add rhymes at points where you see the opportunities.

The advantage to having a rhyme scheme in mind is that you’ll be forced to look for those opportunities, but you could just as easily start writing out a free verse poem and just think about rhyme as you go.

It’s all about seeing those moments where a rhyme could add to the poem and taking advantage of them.

While I did say earlier that you shouldn’t immediately aim for a formal poem, there is something about formal poems that could be useful to know.

They very often have preset lengths for each line, in syllables. So what’s the point of this? Well, let’s look at two couplets:

The couplets mean the same thing and end on the same lines but if you read them out loud, you’ll probably feel like the second couplet ‘flows better.’ But why?

Take a closer look at the syllable counts.

If a poem ignores line lengths completely for the entirety of the piece and has huge differences like this across the entire poem, then it will come off as jarring and unpredictable.

Conversely, a poem that keeps its syllable counts fairly tight will typically have more of a beat to it.

Syllable counts do not have to meet the platonic ideal of every line being the same in free verse. Typically, if the counts are just a syllable or two off from each other, our ears will barely notice the difference.

Also, only lines that share rhymes need to have similar counts (in general) for a rhythm to persist.

A| I love cheese.
B| It melts so sweetly on good food.
A| It does please
B| though the way it drips can look rude.

Reading the above poem aloud, you’ll notice that it doesn’t sound nearly as jarring as the couplet we talked about.

This is because the ending sounds and attention to the lengths of “A” vs “B” make it apparent that the different line lengths were done on purpose.

The “A” lines are exactly 3 syllables while the “B” lines are exactly 8, and our ears are pleased by the symmetry of the lines that rhyme with each other. A good poem doesn’t do things by accident. Poems that portray clear intentional choices in their structure tend to stand out.

Now, metric poetry actually takes line lengths a step further and adds specific standards for which syllables will be stressed and unstressed, but don’t worry about that right away.

Formal poems really are a beast all their own and I highly recommend starting with free verse and only tapping into formal poetry once you have the basics down. Trying to master meter before you master rhyme would be like trying to learn calculus when you struggle with basic arithmetic.

Master one skill at a time.

Your first poems to feature rhyme should feature it gently. While you may find that you have a talent for it and can easily rhyme on every line, you’re more likely to find that it takes practice.

Set very small, achievable challenges for yourself at first. Here are a few ways you could challenge yourself, but feel free to come up with your own:

As with any skill, starting with realistic tiny challenges and working your way up the ladder is the way to go.

You learn that 2+2=4 long before you learn what a hypotenuse is.

Everything looks challenging and foreign the first time you see it. Start small. First two lines rhyme. Then three. Then four. Soon you have a whole poem in which every line rhymes with another line.

It takes time and it takes patience and that’s okay. Focus on the line you’re working on right now before you move on to the next one. When it’s all said and done, it really is that simple.